Ethiopia is a land of hydrological extremes. It is often referred to as the ‘water tower of East Africa’ due to its mountainous highlands and heavy seasonal rainfall, when in fact over 60% of the country’s land mass is arid or semi-arid, and vulnerable to climate extremes. With water distribution widely varied, and annual rainfall ranging from less than 100mm in the south/southeast, to over 2000mm in the southwest, Ethiopia’s ‘water tower’ status belies its real capacity for water security and multidimensional water management challenges.

Despite the water challenges facing the people and their farming systems in Ethiopia, only around 5% of the country’s irrigation potential, and about 10% of its hydropower potential has been developed. Around a quarter of the population still lack access to safe water. Barriers to further development of the country’s water resources remain, including economic, social, and political issues both within and beyond the country, as well as ongoing landscape degradation and invasive species proliferation (for example, water hyacinth). 80% of Ethiopia’s population is dependent on the agriculture industry for employment – improving the country’s water scarcity will help to establish a more sustainable agricultural base, whilst also paving the way for industrial development. Improved water management and water security is central to Ethiopia’s future capacity for climate change resilience.

The ‘Central Ethiopian Problemscape’, a study area defined by our Ethiopia Collaboratory, encompasses Addis Ababa and its environs, including parts of the Abbay, Awash, and Central Rift Valley basins.

The Abbay River Basin covers an area of nearly 200,000 km2, 20% of the country’s total area, and accommodates around a quarter of the national population (33 million). Around 40% of Ethiopia’s agricultural production, and 45% of the total surface water of the country are generated in this basin. The main river in the basin is the Abbay River (or Blue Nile River), which supplies about 80% of the water in the Nile during the rainy season. Drought and flood are frequent hydrological hazards affecting different parts of the basin with varying intensity, with climate change projected to increase the frequency and severity of such extreme events. Rainfall is the main source of water for agriculture in the basin, and rainfall variability creates unreliable and varied water availability, presenting a major water problem to people living and farming in the basin. Water demand in the basin is also increasing, as both the population and economic activity grow.

The Awash River Basin, approximately 9,981 km2 covers the central highlands of Ethiopia and the north-eastern part of the Ethiopian Rift Valley System. Addis Ababa, the capital city of Ethiopia, is situated at the central part of the Akaki catchment in the upper part of the basin. The Big Akaki River originates north-east of Addis Ababa and flows to the southwest part of the city, and the Little Akaki River originates in the Wechacha Mountain landscape, located to the northwest of Addis Ababa. The Hub’s work is focused on the Upper Awash River sub-basin, which is one of the most populated sub-basins of the Awash. It is the most densely populated, industrialised, and urbanised, and there are high levels of water scarcity and pollution.

The Central Rift Valley (CRV) sub-basin is known to be one of the most hydrologically vulnerable areas of Ethiopia. It is one of four major sub-basins in the Rift Valley Lakes Basin of Ethiopia, located in the southern part of the country. Covering 14,554 km2, the CRV has a projected population of 4.2 million; highland parts of the basin are more densely populated, compared to sparsely populated lowland areas. The basin consists of four major lakes located within the Main Ethiopian Rift Valley: Ziway, Langano, Abijata, and Shalla. Lake Ziway forms the largest, central freshwater ecosystem for the sub-basin. There are also other smaller lakes, springs, and wetlands. The topography of the CRV sub-basin is complex, and the hydrological behaviour of the basin varies from watershed to watershed. Recurrent drought, flooding, and other problems related to climate variability have severe impacts on infrastructure, livelihoods, and economic activity and development, with flooding being particularly common in the sub-basin. 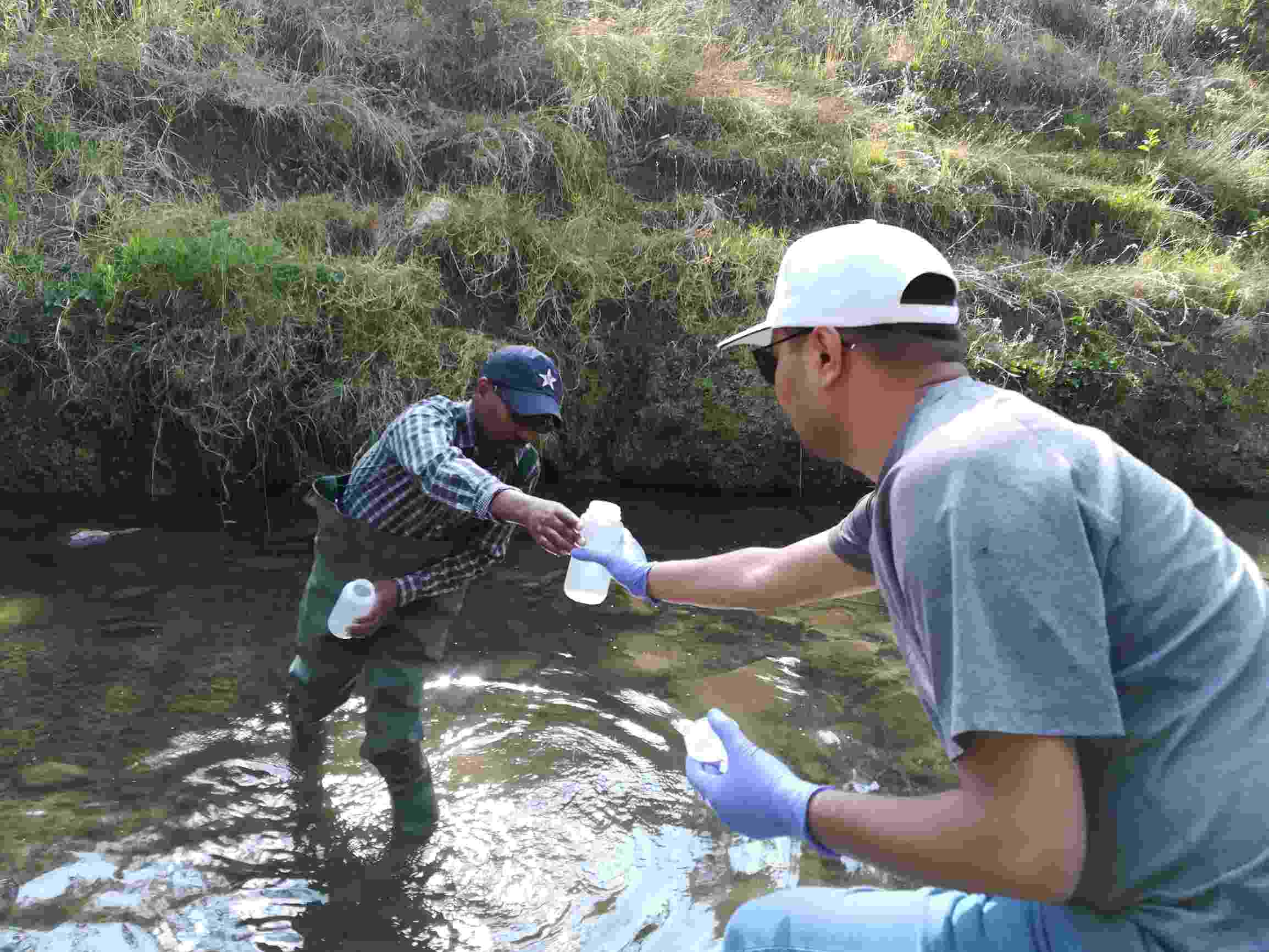 Water sampling in the Akaki

The Ethiopia team’s research embraces two facts: Ethiopia is hugely variable hydrologically, socially, topographically, and in terms of its ‘problemscapes’; no set of solutions is either permanent or necessarily transferable. Co-production with key stakeholders is key to building solutions relevant to contemporary challenges. The Ethiopia Collaboratory is working closely with a range of institutional actors from national through to local levels, including the Ethiopian Ministry of Water, Irrigation, and Energy (MoWIE), Ministry of Agriculture (MoA), River Basin Authorities, and key institutions like Addis Ababa Water and Sewage Authority (AAWSA), building strong, ongoing relationships and working to bridge policy, data, and capacity gaps.

The Ethiopia Collaboratory’s specific objectives are: (1) to generate innovative knowledge and evidence to enable informed decision making around water resources; (2) to enhance the understanding, valuation, and effective management of water systems; (3) to enhance the governance of water systems across scale in the three basins.

The team has defined the new system boundary of the ‘Central Ethiopian Problemscape’ to investigate the interplay between water security risks, values, and governance in Ethiopia. One of the biggest barriers to water security in Ethiopia is a lack of integrated data. Data is key to informing effective decision making, institutional responses, and governance, particularly when ensuring governance allows future development whilst also reducing poverty and vulnerability. The team are focusing on key priority basins, which each demonstrate a set of contrasting water security challenges, and their approach aims to build on ongoing activities established by partners.

In the Central Rift Valley Lakes sub-basin unregulated abstraction and water pollution (mainly from industry and horticulture) are the most significant challenges. The creation of an appropriate water allocation system for equitable, efficient, and sustainable water use is fundamental for tackling water security in the basin.

In the Abbay Basin, which is Ethiopia’s largest river basin, water security issues are linked to the seasonality of rainfall, high runoff, related erosion and degradation, and soil moisture shortages during the dry season. Protecting catchments in this basin is now a critical task following the construction of the Grand Ethiopian Renaissance Dam (GERD).

The Ethiopia team is using a transdisciplinary and integrated approach, cutting across both scales and sectors. They are committed to unpacking Ethiopia’s complex water security challenges, helping to overcome the country’s historic and emerging water insecurities, and creating governance and policy options that enhance informed decision making and support the development of institutional capacity. 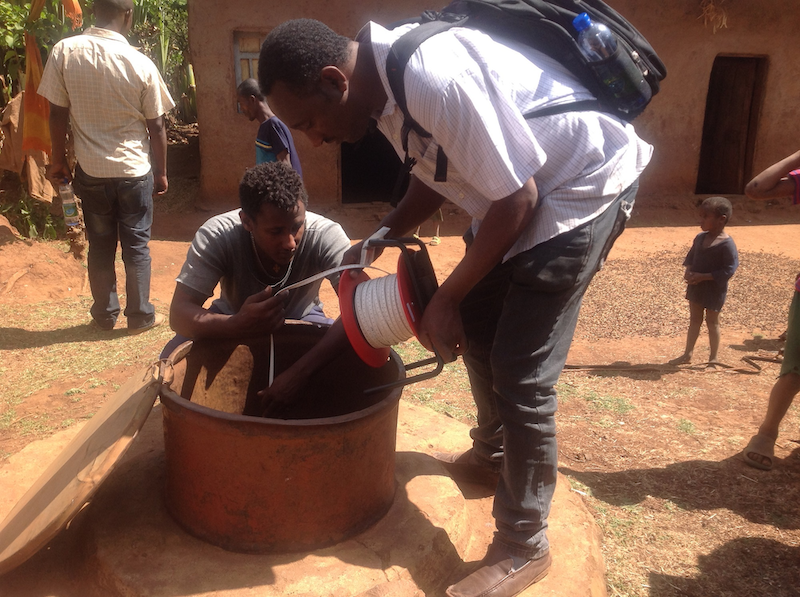 The team are also leading work on hybrid water security and problemscaping; hydro-climatic risks and water resource management; institutional analysis for improving quality of hydrological services in Ethiopia; land use systems dynamics and the water security nexus; and the nature of links between spatial planning and water planning (linking to water sensitive planning, which our India Collaboratory are leading on).