Delhi’s population now exceeds 31 million and is projected to become the largest metropolitan area in the world within the next decade. Whether the city can continue through a period of such rapid expansion, whilst also maintaining sufficient water supply to support the water and food demands of its growing population, is one of the most pressing problems the city is facing today.

Rapid population growth and unchecked urbanisation are causing the already critical water balance to tilt severely beyond tipping point. Much of this freshwater crisis is hidden beneath the surface; India is more dependent on water pumped from aquifers than any other nation, accounting for approximately a quarter of the global demand for groundwater. In particular, Northwest India has emerged as a hotspot of the unfolding crisis, with the NCT of Delhi at the epicentre. 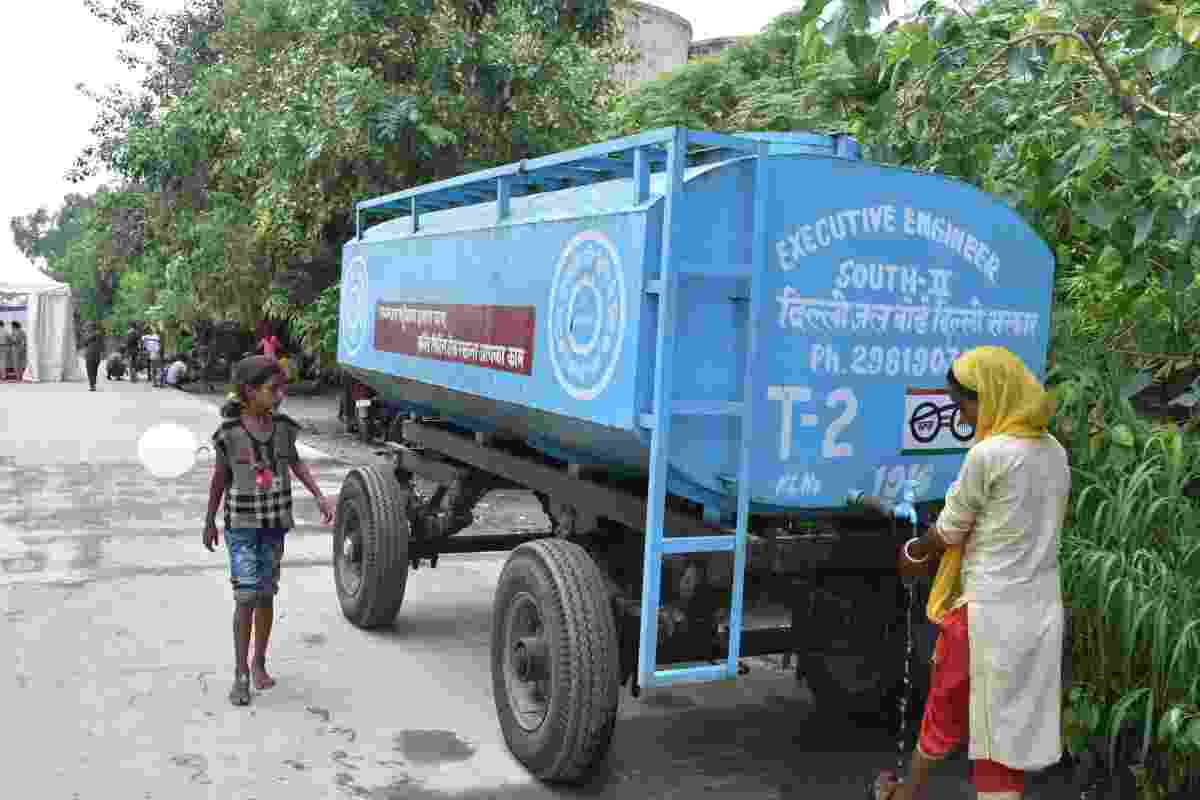 Despite its critical importance to the country’s economic development, and the health and livelihoods of millions of residents, the unobtrusive nature of this invisible yet invaluable natural resource has allowed it to evade active governance and management. Ambiguous laws granting landowners the right to the water beneath their property, and the resulting development of a ubiquitous network of illegal boreholes across the city, have allowed the withdrawal of groundwater to go unchecked. Households living in unauthorised slum settlements, excluded from the city’s water distribution networks, are left at the mercy of the ‘water mafia’ that remains a commonly accepted illegality. Rejuvenation of the city’s aquifers is obstructed by a metropolis overtaken with concrete and infrastructure. Illegal constructions near reservoirs and waterways choked by waste further disrupt the natural recharge process.  Such management failures have contributed to groundwater withdrawals across Delhi exceeding the natural recharge rate by 25%.

A borewell and rainwater harvesting system used for irrigation, Delhi

The looming groundwater crisis is further intensified by climate change. Rising temperatures and an increase in the frequency of extreme heat wave events experienced across India are increasing evaporation rates. This not only disrupts the replenishment of aquifers but also contributes to the drying up of vital surface water supplies, forcing an increasing dependence on groundwater. Soaring temperatures alongside the increasingly erratic and unreliable monsoon precipitation has led to groundwater droughts in recent summers, magnifying the vast inequality between the city’s rich and poor. It is the residents of slum areas in the inner city who bear the brunt of the crisis, scrambling to obtain and pay for limited water supplies, often delivered by illegal water gangs charging heavily inflated prices. Studies project groundwater droughts across the country will only intensify in future years.

These competing pressures combine to threaten the sustainability of vulnerable groundwater resources and question the future water supply of India’s capital. Improvements in water management and governance schemes are integral to eliminate overexploitation. Since groundwater is a hidden resource and cannot be measured directly, improving observation and understanding of groundwater storage change, and the drivers of it, is an essential foundation to supporting effective and sustainable management decisions.

One of the greatest barriers for sustainable groundwater management is the ability to accurately map aquifer water levels. Traditional approaches for evaluating groundwater resources rely on groundwater level measurements from monitoring wells. However, these observations, where they exist, are often limited due to sparsely distributed and spatially inconsistent distribution of monitoring wells, temporal inconsistencies in measurements, and restricted access to data across political boundaries. Further complications arise through management-driven clustering of observation wells in aquifers that are highly productive, while neglecting monitoring activity in less profitable areas. The increasing use of remote sensing techniques could overcome these spatial limitations through the provision of a global, wholly representative, and apolitical dataset to infer aquifer dynamics.

Launched in 2002, as a joint mission between NASA and the German Aerospace Centre (DLR), the Gravity Recovery and Climate Experiment (GRACE) has been transformative in its ability to track the Earth’s water from space. GRACE consists of a pair of satellites working in tandem. The pair orbit the Earth at the same altitude, taking 30 days to complete a full cycle of the globe. By tracking how the distance between them changes, they provide monthly snapshots of how the Earth’s gravity field is changing, driven largely by the mass movement of water on the surface. When combined with hydrological models, GRACE can be used to track big changes that occur in water storage under the surface, providing the transformative ability to weigh large-scale changes in groundwater across the globe.

In a recent study, we explored the capability of GRACE data in understanding the state of groundwater resources in the Delhi region. Examining GRACE derived groundwater estimates within the wider catchment area supplying water to the city (the Yamuna basin) in combination with auxiliary data describing climatic and anthropogenic influences, and a toolset of statistical methods, provided insights into how and why the groundwater crisis has been unfolding throughout the past decades.

Our research showed that groundwater has been steadily depleting at alarming rates across the basin, with rates of decline exceeding 8cm/year in some areas, particularly in the northern regions encompassing Delhi where anthropogenic activities are the main drivers of this change. In contrast, in the south of the basin away from the teeming metropolis, some areas are gaining groundwater, primarily driven by changing climatic conditions. This study demonstrated the vast potential of GRACE to provide valuable, large-scale information about groundwater in the region. However, the scale of GRACE hinders translation of these insights into management decisions.

Other remote sensing datasets provide exciting opportunities to observe changing groundwater resources at an intermediate scale between those of GRACE and wells. Interferometric synthetic aperture radar (InSAR) is a technique used to measure ground deformation at a spatial resolution of tens of meters.  Ground deformation offers an indirect observation of how the water is changing beneath the surface, and so from this groundwater storage dynamics can be inferred. Our future research will seek to explore the potential of InSAR to reveal further information about groundwater dynamics in the Delhi region. Ultimately, we will investigate how the complementary remote sensing tools can work together to provide value from a perspective of water management and close the water cycle observation gap, a task becoming increasingly critical to ensure future sustainability of groundwater use.